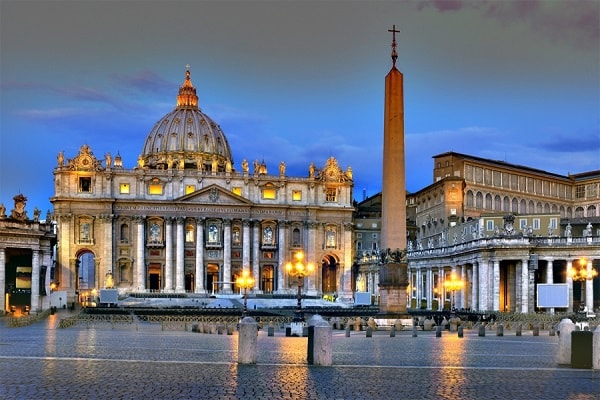 After the Constantinian basilica, for the rebuilding of the new basilica Pope Julius II chose Donato Bramante who cultivated the idea of ​​superimposing the Pantheon in the Temple of Peace, as it was then called the Basilica of Maxentius; that is to merge two types of temple that Leon Battista Alberti had already indicated as exemplars: the "Etruscan" one, represented by the Basilica of Maxentius for his erroneous interpretation of Vitruvius, and the round one, which was the Pantheon. The new basilica had initially been conceived as a large square surmounted by a dome which, supported by grandiose pillars, had to be hoisted upwards, almost suspended in space. From the same dome four Greek cross arms departed, ending in a round apse, and outside in a straight line. However, the project remained undefined and assumed an expansion up to oversized dimensions that would have presented many difficulties of realization.